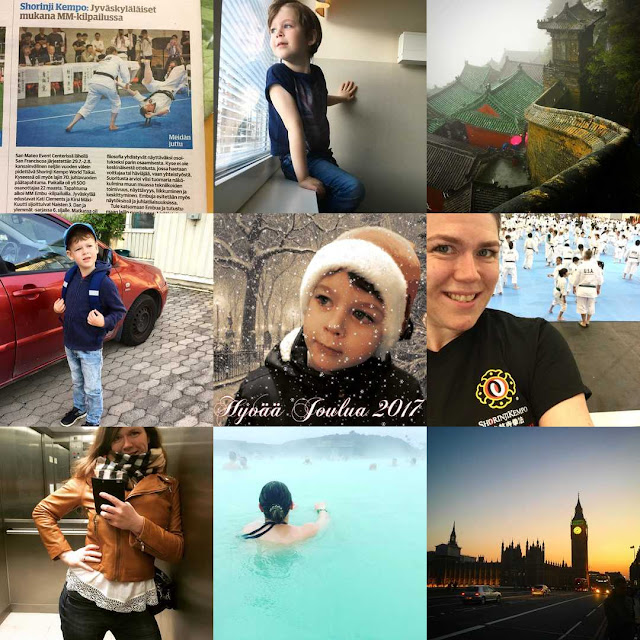 /Summing up my year of 2017, once again in English. I do this every year, just like Charlie Brooker, except you know - not funny...

Competed in World Championships… Which the best nine shows pretty well. I also travelled to iceland, climbed Wudangshan and put my son into school... Decided it's time to discuss divorce.

2. Did you keep you New Year’s resolutions, and will you make more for next year?
I made some promises yes. List you can see in here. I'll post tomorrow about how I think I did in them. Once again, some of the promises were kept, some of them were not. In many ways, this year I have taken steps that were huge leaps into a happier life.

3. Did anyone close to you give birth?
There is a new baby in the pink wooden house near mine, but no immediate family babies this year.

4. Did anyone close to you die?
Two of my great aunts died:( I miss one of them very much.

5. What countries did you visit?
UK, China, Sweden, Germany - my usual travel destinations... But also Spain, Norway, Iceland, USA, Ukraine & Azerbajdzan... More excotic than last year for sure. Even four countries that I never visited before (Norway, Iceland, Ukraine, Azerbaijan).

6. What would you like to have in 2018 that you lacked in 2017?
More staff! I have been working on 6 projects... That's too much for one person to handle. But I think the situation is improving.

7. What date from 2017 will remain attached upon your memory, and why?
3rd of February, when I made a crucial spelling mistake in Facebook. Which then escalated into climbing some mountains and looking for houses later in the year... Remember kids, always use proper language in Social Media!

8. What was your biggest achievement of the year?
Making concrete steps to improve my happiness rather than sitting around not saying out loud what I want.

9. What was your biggest failure?
In general not looking after my health better.

10. Did you suffer illness or injury?
Well I was ill when competing in San Francisco, but nothing more than a cold.

11. What was the best thing you bought?
Same answer as last year: Plane tickets to various great places such as Iceland and China.

12. Whose behavior merited celebration?
I am lucky enough to be surrounded by the most amazing supportive people, who are there for me in the good and bad times. You guys know who you are. Thank you.

13. Whose behavior made you appalled and depressed?
Now I have to say that certain members of my family have done quite a bit of unsupportive behavior which is occasionally really hard to understand.

14. Where did most of your money go?
Living and traveling, as usual. Bought tickets to US via Iceland, that was a great choice.

15. What did you get really, really, really excited about?
Mountain climbing, Kempo... Champagne in brought to me into the bed for breakfast - I guess I'm easy that way. Zhangjiajie was a fairy tale place in the world where I would certainly think of moving when my son finishes school in about um... 11+something years...At least for a while. But honestly I get excited about everything - the world is an amazing place that way: I get excited of all the things I can do, the opportunities ahead: My new job, buying a new house, having new family members etc.

16. What song will always remind you of 2017?
I think it's "Stairway to Heaven", which we listened to after 10hours of walking stairs in the Wudang mountain completely lost in the dark, in the rain... After finally getting to our hotel.

Songs that are also in this year's playlist:
"Scared of the Dark" by Steps
"Give Your Heart a Break" by Demi Lovato
"Rolling in the Deep" by Adele
"Hollywood Hills" by Sunrise Avenue
"Supreme" by Robbie Williams
"Diamonds and Rust" by Joan Baez
"Perfect Day" by Lou Reed
"Never Met a Girl Like You Before" by Edwyn Collins
"Too Much Love Will Kill You" by Queen

17. Compared to this time last year, are you:
I. happier or sadder? Happier. Absolutely.
II. thinner or fatter?  Fatter. My Health hasn't been a priority in the last few months.
III. richer or poorer? Richer I guess. I guess this is relative, as I am about to owe more money to the bank shortly.

19. What do you wish you’d done less of?
Drunk alcohol.

20. How did you spend Christmas?
At home in Jyväskylä, surrounded by loved ones:) Good Christmas.

24. What was your favorite tv programme?
Game of Thrones, I guess. I have watched very little television this year. Due to not wanting to put time into television watching.

25. Do you hate anyone now that you did not hate this time last year?
No I don't.

27. What was your greatest musical discovery?
Probably Spotify:)

28. What did you want and get?
Freedom, acceptance, equality

30. What was your favorite film of this year?
I have also seen very little films... I think I've been to the cinema three times and two of those was 'Last Jedi'... Virpi and I have watched a couple of films from the IMDB list. One was the Great Dictator, Chaplin is still not my thing though...

31. What did you do on your birthday, and how old were you?
I was 36. I have trouble remembering what did I do... Google calendar says I've been out though, so must have been a nice night:)

32. What one thing would have made your year immeasurably more satisfying?
Well the key to that would be to argue less with my family. I have to try to not take things personally.

33. How would you describe your personal fashion concept in 2017?
More of the same. I have really not had time to think of fashion this year... I like extravagant dresses. Jeans and tops. Leather jackets. Clearly I needed to have a green one, so now I have one...

34. What kept you sane?
My friends. I also saw a therapist for some sessions.

35. Which celebrity/public figure did you fancy the most?
I went to a concert this year! The Steps! Love them. Out of Steps, I think Claire is my favorite still, despite of it all...

36. What political issue stirred you the most?
Brexit is still the one that affects me most directly. As it prevents my soon to be ex-husband from taking a morgage from a British bank.

37. Who did you miss?
I spent almost two months in the summer traveling and missed certain someone at home very much.

38. Who was the best new person you met?
"New person" is a tricky question, as most of my attention went to exploring someone who really wasn't new at all... But I would have to say his daughter S. So loud, wise, social and genuine <3.

39. Tell us a valuable life lesson you learned in 2017:
Life is short. Live today. Ok I might have known this before...

40. Quote a song lyric that sums up your year:

(Year after year, this is one of the classics)