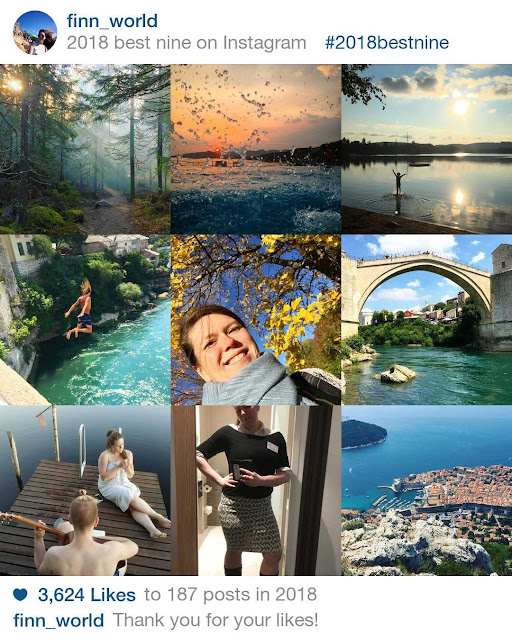 /Summing up my year of 2018, once again in English. I do this every year, just like Charlie Brooker, except you know - not funny...


So many to choose from but I will go with divorce. Okay and went through a major renovation with my new house

I always make some goals, those you can check out here. I will make a comprehensive post about my thoughts. Most categories have not changed much for 2019 - however there are some clear steps that I want to make specifically in home economics and this is my goal to do in the coming year.

3. Did anyone close to you give birth?
Babies - yes! My colleague Tiina got her daughter, My friend Johanna got a second daughter... Who else? It's babies all around.

4. Did anyone close to you die?
A friend of mine did die at devastatingly young age.

5. What countries did you visit?
My work trips were to UK, Sweden, Germany, Austria, Romania, Italy and Portugal, but the most memorable was our summer holiday road trip to Croatia, Montenegro & Bosnia & Herzegovina. Those three I had not previously visited and absolutely loved. Amazing trip. In the Autumn we also went to Northern and Southern Ireland, which I had not been before - this meant that I visited the total of four new countries this year! The last trip of 2018 was to Gdansk with my dear colleagues - what a great Christmas party:)

6. What would you like to have in 2019 that you lacked in 2018?
Last year I said more staff and indeed this year I had some, which has been nice. But I would say motivation to take care of my own health.

7. What date from 2018 will remain attached upon your memory, and why?
Probably 30th of July, that's when I said yes.

8. What was your biggest achievement of the year?
Wow, there is so many. One would be to buy this house under the radar under the market value. Another would be to grow to be a EU project coordinator.

9. What was your biggest failure?
In general not looking after my health better. (Same as last year!)

10. Did you suffer illness or injury?
I have been having a bad hip and also an arm that goes numb. Not good.

11. What was the best thing you bought?
Best by far was the house.

12. Whose behavior merited celebration?
My co-workers Pieta and Mikko are amazing, I truly appreciate their work. So is my colleague Ellinor from Sweden. But of course there are many others - family & friends. Love you guys.

13. Whose behavior made you appalled and depressed?
Certain ex-family members who have started to treat me like air - I can understand it, but still makes me rather appalled.

14. Where did most of your money go?
Real estate and renovating.

15. What did you get really, really, really excited about
My new life. Road trip in the Balkans. Picking up tiles for my new floors. Making money with additional means. Studying passive revenue streams. Saving and investing.


Most listened would be Scared of the Dark by Steps, let's go with that

17. Compared to this time last year, are you:
I. happier or sadder? Happier. Absolutely.
II. thinner or fatter?  Fatter. My Health hasn't been a priority in the last year.
III. richer or poorer? Richer I guess. I guess this is relative, as I have more money borrowed from the bank than before, but at the same time, I definitely have more assets.

19. What do you wish you’d done less of?
Drunk alcohol.

20. How did you spend Christmas?
In Jyväskylä, surrounded by loved ones:)

24. What was your favorite tv programme?
Vikings. I have watched very little television this year, but Juha and I have watched Vikings and the serial killer drama with Gillian Andersson which I have now forgotten... I guess I also watched Selviytyjät Suomi which was awesome:)

25. Do you hate anyone now that you did not hate this time last year?
No I don't.

27. What was your greatest musical discovery?
It was awesome to go and see Suede.

28. What did you want and get?
A New beginning.

30. What was your favorite film of this year?
I am trying to remember if I've been to the cinema once... I did go on S's birthday to see a Jack London cartoon with the kids, but that hardly counts.

31. What did you do on your birthday, and how old were you?
I was 37. I spent the day waking up in Lohikoski. The kids had made cards... I then had dinner by my self I think. The day was perfect. Of course I celebrated much later with the Star Wars party which was a great success.

32. What one thing would have made your year immeasurably more satisfying?
There has been a few low points to this year - some to do with too much alcohol. This is something I will fix in the coming year.

33. How would you describe your personal fashion concept in 2018?
Whatever is in my closet. I didn't buy many clothes, there's already too many of them.

34. What kept you sane?
I think it's the fact that someone hugs me to sleep every night that we are together.

35. Which celebrity/public figure did you fancy the most?
I have become obsessed with some people on insta stories & podcasts. My favourite persons are:

These are all in Finnish... In English I listen to Bigger Pockets Money at the moment, but thinking of some others too...


36. What political issue stirred you the most?
Climate Change

37. Who did you miss?
I miss my English relatives very much

38. Who was the best new person you met?
In my team in Learntech Accelerator, there is a lot of new acquaintances that deserve praise. I think there has not been one above all, but if I can pick someone I met in late 2017 and got to know this year, then Pieta.

39. Tell us a valuable life lesson you learned in 2018:
Buy assets, not liabilities.