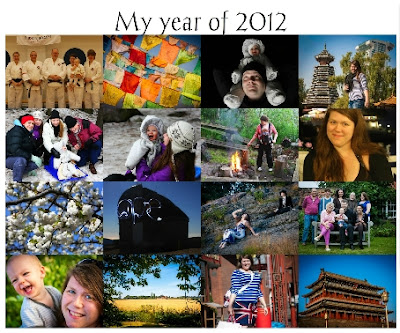 Summing up my year of 2012, once again in English.

1. What did you do in 2011 that you’d never done before?
Moved to China! It's been most wonderful and also much, much more demanding than I could have thought of.

2. Did you keep you New Year’s resolutions, and will you make more for next year?
I need to check last year's promises... I have no idea what I promised. I will make another post about those. I am happy that I've lost some weight though and lived a more healthy life.

3. Did anyone close to you give birth?
There was no new babies in my family, but several among my friends. I guess the 'closest' baby was my friend's fourth, a beary boy:)

5. What countries did you visit?
Well yes, much more than last year, which was three! Let's see.
Italy
Greece
UK
China
Well, actually when you put it like that, not many more. My work trips were suffering from the Southern Europe syndrome and I went to both Greece and Italy twice.

6. What would you like to have in 2013 that you lacked in 2012?
I would like me and my family to be less ill all the time. That's the main goal. I'd like to also have time to do research - write enough papers to complete my PhD.

7. What date from 2011 will remain etched upon your memory, and why?
Possibly 25.12, when we took our son to a hospital early Christmas morning in Xi'an.

8. What was your biggest achievement of the year?
Surviving in China? No, it's third dan, really. I am very proud of my year overall.

9. What was your biggest failure?
I wouldn't say I've failed, but I would have liked to have done more research.

10. Did you suffer illness or injury?
Yes well, there has been enough colds, diarrea and ill spells for one lifetime. At the moment I'm resigned to the fact that the whole family will not be well at the same time until we return to Finland in March.

11. What was the best thing you bought?
Well, that would still be plane tickets to China.

12. Whose behaviour merited celebration?
Once again my family's. My son really is a good little boy, considering he has to live in China. My huband is the most patient translator-cleaning fairy-baby minder-finnsitter that I've ever met. My mother and my aunt have rentlessly taken care of my son and my brother has played his heart out with him. Without their efforts, my life would be so much worse.

13. Whose behaviour made you appalled and depressed?
People who don't realise that there is more to life than complaining on how bad theirs is. Do something about it! I mean, everyone needs to complain sometimes but not ALL THE TIME. And there's ways to make it better.

14. Where did most of your money go?
Living, definitely. Travelling and morgage are a pretty good guess. I haven't really shopped much before I came to CHina and shopping here is so cheap that it does not take 'most of my money'.

16. What song will always remind you of 2010?
Call me maybe:) Or possibly 'We are never ever getting back together' (I'm still 15 years old inside, really). And 'Euphoria' of course.

17. Compared to this time last year, are you:
I. happier or sadder? Happier I hope
II. thinner or fatter? Thinner! Yes!
III. richer or poorer? Probably richer weirdly, but not for long!

18. What do you wish you’d done more of?
Written articles

19. What do you wish you’d done less of?
Made expectations that were not realistic. Life is great when you just keep your expectations as low as possible.

20. How will you be spending Christmas?
We spent it walking around the Wild Big Goose Pagoda in Xi'an, eating both pizza and Indian and finally opening presents in my relatives' hotel room. Definitely a new way to spend Christmas. Of course you know how the night after turned out...

24. What was your favourite tv programme?
Homeland, Downton Abbey, Sons of Anarchy, The Walking Dead, The Hour... These remain my favourites. I also find Survivor still to be exciting to watch after 26 seasons (I must be mad).

25. Do you hate anyone now that you did not hate this time last year?
No.

26. What was the best book you read?
Probably Catching Fire, as I only read two books really, it's a bit of a draw.

27. What was your greatest musical discovery?
Call me maybe? I keep on picking my musical discoveries from Glee and Eurovision only, so it's not really very big variation.

28. What did you want and get?
I got to move to China. That must be it. I also got my contract renewed for three years, so that's a big thing at work. Overall good year.

30. What was your favourite film of this year?
Hunger Games by far... I actually had a hard time remembering the Oscar season now, but yeah - it was Hugo vs. The Artist... Slightly disapointing, so my movie year's peak was the hunger games.

31. What did you do on your birthday, and how old were you?
Hmm... I threw a party, yes. It was sometime in April, I think. Quite a nice party, but nothing special. I hope to do something more exciting this coming year. In my real birthday I once again have no idea what I did. I better check the blog.

32. What one thing would have made your year immeasurably more satisfying?
Not being ill in China, like all the time. Proper heating... One more room in our flat. Working internet connection.

33. How would you describe your personal fashion concept in 2012?
Improved. It's still jeans and a sweater basically, but I'd like to think I'm more color concious at least. I've picked certain colors and tried to fill my wardrobe with those colors. Main colors are: blue, conjac, red, black and white. In the winter also grey and burgundy. Also currently I enjoy anything furry: hats, vests, Uggs. I've lost my heart to too many fake bags as well. what can I say: Too much family to keep in diapers to put 1500euros for a hand bag... But they do look cool. Marks that I've learned to love this year are probably Mulberry, Uniqlo and Vila

35. Which celebrity/public figure did you fancy the most?
Jon Snow from Game of Thrones might be the answer for this...

36. What political issue stirred you the most?
Probably the election of the new communist leader which was making internet impossible in China for a while...

38. Who was the best new person you met?
Out of my new Chinese friends, so far Ling and Wenjun have been the most promising. Pei and M'Kai are also very cool.

39. Tell us a valuable life lesson you learned in 2010:
Think really carefully before moving to China for the WINTER with a 1,5-year-old - are you prepared to fight all the colds and illnesses?

40. Quote a song lyric that sums up your year